How important is water security to a rural economy? The case for the Boyne river

Back to Research Papers 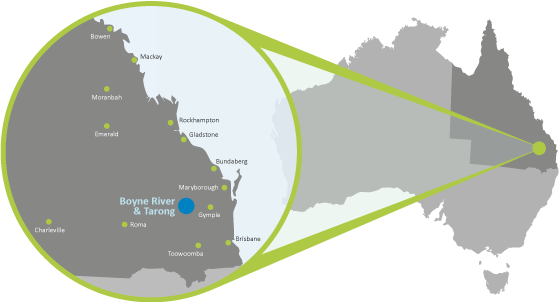 The irrigation area relies on water stored in the Boondooma Dam near the town of Proston (figure 2). However, the Tarong power station receives a large allocation (29,990 ML) of high priority water from the dam and irrigation water is 9,142ML of medium priority water. Some irrigators also have additional but quite limited on-farm water storages. Water available for irrigation is released from the dam, and it flows downstream where irrigators with a water allocation pump out of the river either directly onto crops or into on-farm storages.

The supply of irrigation water in the system is notoriously unreliable. High priority water for the Tarong Power station has been very reliable. High priority entitlements have been fully allocated at the start of the water year (1 July), every year since 2002. The only exception was in the 2007 water year which was fully allocated 7.5 months after July 1 (in Feb 2008) (Sunwater, 2018).

Medium priority water for irrigation is also intended to be fully allocated at the start of the water year. In years where this hasn’t occurred, full allocations have been announced later in the year as listed below:

While water is allocated to irrigation, it is not enough to meet demand. This leads to two situations. First, irrigators opt to fully irrigate crops and trees from July onwards but water allocations are fully utilised by about February/March each year. During this period, some growers supplement crops with limited on-farm stored water and some use excavation equipment to dig for water in the bed of the Boyne River. This is expensive, inefficient and not environmentally desirable. Some growers have no option but to grow crops and trees dryland until another allocation is potentially available in July.

Second, in dry years such as 2018/2019 when dam levels are low, little water is available to be released for irrigation. Growers have an allocation that they have purchased but virtually no water can be accessed.

In addition to these limitations on supply, the flow of water from Boondooma Dam to downstream properties through a porous sandy riverbed is quite inefficient. Water for irrigation can be released into a dry riverbed on multiple occasions during a growing season with considerable loss of water in “wetting up” the river channel. Distribution loss is 18% of the irrigation allocation (29,990 ML is provided to Tarong Power Station in a pipeline with negligible distribution loss) (Sunwater, 2018).

Overall, water availability in the Boyne system for irrigation is 73%. That is, on average water is available to fill 73% of allocations for irrigation.

Purpose of the Study

There has long been an interest in improving the reliability of water for irrigation. This would lead to major economic benefits for agriculture with multiplier impacts across the regional economy. The construction of a weir downstream of the Boondooma Dam at Cooranga is seen as the most practical solution. This would store water adjacent to the main irrigation area reducing distribution losses and a relatively small weir (compared to the dam) would allow water to “cycle” with the weir filling and refilling with relatively small flows in the river.

While there has been a community and government focus on the specific costs and the feasibility of the weir, it is also important to better understand the issues and potential economic and social benefits of increased water reliability per se, both for agriculture and for the broader regional economy. The issue is not just a simple cost/benefit of the weir with a focus on return from the cost per ML of supplied water. Rather, this study assesses the broader economic and other benefits of improved reliability of water. The benefits may include increased production, better opportunities to access markets, the establishment of different crops such as blueberries, pecans etc. or changes to production systems.

The potential benefits of the improved reliability of irrigation extend beyond agricultural production and its service sectors. It can also provide the opportunity for the North Burnett region to diversify its economy, have higher skill employment that retains young people in communities, have value-adding to primary industries and improve entrepreneurship and the liveability of the region.

Previous Article Next Article
May
2019

Rural economic development is a complex process and the breadth of issues confronting policy makers, both contextual and conceptual, need consideration. This paper provides an initial exploratory analysis and overview of key issues in economic policy making of relevance to rural and regional areas, highlighting the key issues that have emerged from scholars and practitioners.  The purpose of the paper is to present the landscape of factors and issues relevant to policy making  and to enable effective conceptualization of rural/regional economic policy development within a larger contextual framework.  This exploratory paper will unpack key issues influencing rural/regional governance, policy formulation, adoption and implementation.

Internet connectivity is essential for prosperity and development in all societies. This policy‐focussed report is the culmination of a qualitative study of digital connectivity and telecommunications in rural Far North Queensland (FNQ). In particular, the research investigated the lived experience of digital inclusion – a combination of internet access, affordability of technology, and digital ability ‐ in agricultural households and communities the northern Gulf region. The Australian Digital Inclusion Index (ADII) shows that North West Queensland (which takes in the Gulf Savannah) is one of Australia’s least digitally included regions.

The ADII further suggests that farmers and farm managers tend to score more poorly in the Index than others in comparable circumstances, particularly on the digital ability sub‐index. This research aimed to unpack how these quantitative insights ‘play out’ in the context of rural FNQ, thereby shedding light on the nuanced and context‐specific factors that impact digital participation of farming households and communities.